ONCE UPON A TIME there lived a wooden puppet called Pinocchio. Pinocchio lived with his master Geppetto in a small village.

Pinocchio was always getting up to mischief, and his unpredictable antics would often drive his patient master crazy. But in one thing he was constant and unswerving: he wanted above all other things to be a real boy.

Pinocchio spent his days at his master’s house, helping in his workshop. There wasn’t much more a puppet could do.  The people of the village had heard about the strange wooden talking creature and were afraid of him, so Geppetto would not let Pinocchio venture into town on his own, in case the villagers tried to hurt him.

Because of this Pinocchio grew lonely. He longed to have friends who would not judge him by his appearances. Now, more than ever, Pinocchio longed to be a real boy.

Geppetto saw how sad his beloved puppet was becoming. He did not know what to do until one day he had an idea.

“We shall get a computer,” said Geppetto to Pinocchio. “On the internet you will have many friends.”

Geppetto told the puppet that he should set up a blogsite, so he could tell the world what he was thinking and how he was feeling.

“But you must promise to always tell people the truth,” Geppetto warned him.

Pinocchio didn’t much like the idea of telling the truth. He was a wilful, naughty little puppet, and the thing he loved most of all was to play tricks on people.

So one day, while Geppetto was having his afternoon nap, the little puppet ran away.

After walking for many hours, Pinocchio came to a dark and enchanted wood. He was afraid at first to enter the wood, but he summoned up his courage and followed a little path he found that led through the trees. The puppet didn’t know exactly where he was going, but the thing he wanted most of all was an adventure.

Just as it was starting to grow dark and cold, and as Pinocchio began to wonder if he ought to go home and beg Geppetto to forgive him for running away, he came across a fox and a cat sitting at a picnic in a little clearing in the wood.

The fox and cat were pleased to see him, and they offered him some of their jam sandwiches. The told Pinocchio that they were looking for followers to join their merry band of mischief-makers, and they asked the puppet if he would like to join them.

Pinocchio agreed at once and the fox and cat led him back to their house in the woods, where they laid out for him the most splendid feast he had ever seen. The puppet stuffed himself until he could eat no more, and soon he was asleep at the table, his face buried in a plate of custard. The cat and fox put Pinocchio to bed.

In the morning Pinocchio asked the fox and cat whether they would mind if he checked his emails and his blog.

The fox and cat smiled at each other and expressed delight that the little puppet was such a whizz on the computer.  They asked Pinocchio why he had run away, and he explained to them that the thing he wanted most of all was to be a real boy. He would never achieve his dream while he remained cooped up in his master’s workshop.

“You’ll never become a real boy if you write such tired stuff,” said the fox, winking slyly to the cat as he stared at what Pinocchio was blogging. “Nobody wants to know how a wooden puppet is feeling. You must write about more important matters. The economy, politics and the like.”

“But I know nothing about these matters,” said Pinocchio.

“Then,” suggested the fox, “Just write what I tell you. You will get the hang of it in no time. “

And so the puppet sat down and wrote a long blogpost, just as the fox instructed him. Pinocchio didn’t understand much of what he wrote, but even he could tell that some of it was full of naughtiness and mischief.

This pleased Pinocchio terribly. “Can I stay here?” he asked the cat and the fox.

“Certainly you may,” the cat purred.
And so Pinocchio made his home with the fox and the cat.

Every day Pinocchio would login on their computer and every day they would tell him what to write on his blog. Soon he began to understand more about the naughty and sneaky things the fox and cat asked him to write. Before long he was able to write naughty and sneaky things without needing their help at all. The fox and cat were greatly pleased with their new lodger.

Pretty soon all the people of the land began to follow Pinocchio’s blog. The little puppet felt a lot of pressure about what to write, but thankfully whenever he began to struggle for material the fox and cat were always happy to help out. 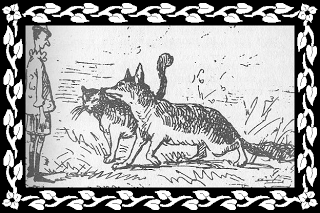 The blogsite became so popular that now Pinocchio was being invited to talk on the radio and to write newspaper columns. Pinocchio sometimes didn’t know what to say or write, but the fox and cat were never far away whenever he struggled.

However, there was one problem with all this punditry Pinocchio was engaged in. Whenever he told a lie or a half-truth his nose would grow a little longer, and the more lies and half-truths he told the longer his nose became. Pinocchio was a wilful and cheeky little puppet, and he could not help but write naughty and misleading things. 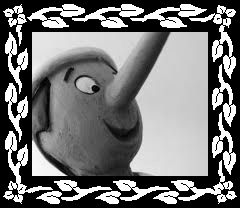 This became something of a problem for the puppet, because  his nose kept getting longer and longer. Soon his nose was so long that he could barely turn his head without knocking over furniture or breaking a window.

One day a group of people that the fox and cat didn’t like very much said a whole lot of very clever things about money. Pinocchio read what the people said and thought that some of it was quite sensible. Pinocchio remembered that he had written something once on his blog suggesting the very same thing.

But the fox and cat summoned Pinocchio and told him that he must speak up against these people.

“We do not like what they say,” hissed the cat. “You are now the most popular blogger in the land. You must write that these people speak bad things.”
“But a lot of what they say is true,” Pinocchio replied. He was now beginning to worry about the length of his nose. How much longer could he allow it to grow?
The fox gave the puppet a table of numbers and told him to post it on his blog. Pinocchio could see from the table that it was filled with nonsense. He grinned hugely at the thought of getting up to more mischief, and soon forgot all about his nose. Pinocchio posted the table of numbers on his blog, feeling certain that he would fool everyone and have a jolly good laugh at the same time.

Just then, without warning, his head lurched forward and he squealed in pain. His nose was growing again! But this time instead of growing just a fraction more, like it did every time he posted something mischievous and untrue, it kept getting longer and longer, and longer! The end of his nose burst through the wall of the house of the fox and cat, flew through the hedge and disappeared into the forest. Pinocchio’s nose did not stop growing until the tip reached the village square over a mile away.

The people of the village were alarmed to see a giant wooden nose bisecting their town, and they began to gather in the village square to discuss the matter. Some people said it was all the doing of the dastardly cat and no-good fox who lived in the wood. Others said it was time to go and burn down the house of those troublesome animals. Before long a mob of villagers had gathered with firebrands and pitchforks. They followed Pinocchio’s nose until they reached the house of the fox and cat.
Meanwhile, Pinocchio began to cry and sob at the ridiculous sight of his nose growing longer and longer, and now he regretted all of the silly things he had written. The cat and fox did not appear alarmed and told Pinocchio not to worry, because a puppet with a nose as long as Pinocchio’s was bound to attract only positive attention and popularity. But the little puppet was no longer fooled and complained that all he had ever wanted was to be a real boy, and that all this internet nonsense had left him looking like a fool.
The fox and cat grew very cross and resolved to punish Pinocchio, but before they could do so there was a crashing noise outside the house. The cat sniffed and said “I smell smoke!”
The house was on fire! The cat and fox bolted out the door, right into the arms of the furious villagers, who dashed their brains out with heavy clubs and and hung their bodies up on meathooks.

The village folk then turned their attention towards Pinocchio, but instead of feeling pity for the poor puppet with the long nose they felt only hatred and anger. The villagers made a huge bonfire and then grabbed Pinocchio roughly, dragging the wooden puppet out of the house and towards the flames.

“Stop this at once!” a voice cried. It was Geppetto, the kindly old man who had given life to Pinocchio.

The puppet wept with joy to hear his master’s voice. “I am saved!” he cried. He turned to see his master, who was pushing people aside to get closer to the puppet.

“You may continue!” Geppetto told the villagers, “I can see now.” The old was at the very front of the mob.

Pinocchio’s timbers were so full of rot and disease that he went up like a fireball the moment he was flung onto the bonfire.

“This is the worst storybook ending ever!” were Pinocchio’s last words as the flames consumed him.