Controversy erupted today before the start of the third cricket test between New Zealand and Australia, when a large hole was discovered on the pitch.

Play was delayed for ten minutes this morning while the captains of the two teams argued with the umpires about what to do.

The hole was discovered by Eden Park head groundskeeper Mark Perham, just after he removed the covers this morning.

“I was shocked to find a rectangular hole in the middle of the pitch, “said Mr Perham. “I don’t know how it got there or who did this. This is an act of mindless vandalism.”

The hole, roughly the size of a postcard and about 15 centimetres deep, is located near the batting crease at the ASB Stand end of the pitch.

Australian captain Ricky Ponting said the hole would make it almost impossible for teams to bat safely or sensibly.

“The hole’s just on a length. If a ball hits the hole it could bounce up and hurt someone. This pitch is deadly.”

New Zealand captain Daniel Vettori agreed. “The pitch is ruined,” he told Sky TV. “We can’t play on this.”

But the objections of the captains were dismissed by the umpires and match officials. Umpire Terry Whiteside said the area was small and would not affect play. He ordered play to proceed.

And by lunch today Australia were in some difficulty. 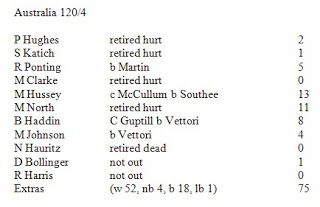