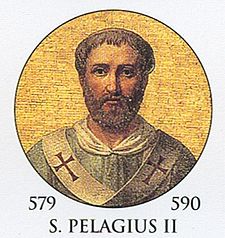 Forget all the nonsense you’ve read about why John Key chose November 26 as the election date.

The real reason is much more cunning.

November 26 is the 1432nd anniversary of the day Pelagius II became pope. Of all the popes who reigned between 579 and 590 AD, Pelagius is perhaps the most famous.

In choosing the date Key is clearly honouring the Catholic Church and seeking its support. If you have visited the Vatican you will have seen the vast riches the Church possesses, and will have an idea of the sort of wealth it has available. The popes are a good ally to have, but they’ve had a hard time of things lately, what with all that regrettable business involving priests and young children.  The Church will be wanting to associate itself with success and glamour, and what better way to achieve this aim than by supporting John Key?

The Church will probably want more than just a few photo opportunities with Key, however. As charming as a photo shoot of cardinals and bishops chilling with Mr Key and drinking beer over a barbecue might be, the Church didn’t get all that gold by being cute, friendly and fluffy. I expect that as a minimum they will demand several places on the National Party list, and if Key wins he’ll probably be expected to start a Grand Inquisition. Because if Key can pull off asset sales, he can sell anything, so it makes sense for the Church to ask this one small favour: may we burn all of our opponents?

If that’s the price Key has to pay for the massive financial support the Church will undoubtedly give him, then it’s a price he’ll almost certainly be willing to pay. Key may be wise to keep quiet about his Jewish heritage, though.

I’m not sure how the Church will manage all the burnings, because releasing that much carbon into the atmosphere will cause a sharp spike in emissions. No doubt the Church is already negotiating an exemption under the ETS for the heretic-burning industry. But if Key is willing to work with the Greens on this issue it may be possible to find a more environmentally friendly way to incinerate the unbelievers (assuming, of course, that the Green MPs aren’t the first on the fire).

It is slightly more ominous that November 26 also marks the anniversary of the opening of Tutankhamen tomb by Howard Carter. We all know about the Mummy’s Curse that haunted Carter’s expedition, and caused death and misery to those around him. So holding an election on this unlucky day can only end in trouble. Mummies are diabolical creatures from the pits of Hell, as anyone who’s seen Hollywood horror films knows. Why would Key choose to put his political fate in the hands of others on this day, of all days? It seems an extraordinary risk to take.

Key may figure that having the full weight of the clergy behind him will enable him to repel the unholy horrors from the very pits of Hell to be unleashed. On the other hand, National have campaigned heavily on a law and order platform, and have made a lot of noise about making our streets safer. If the undead are free to roam our streets, to kill and to steal souls, this may play into the hands of the Opposition.

It would be regrettable if tens of thousands of people were horribly taken in this way. But if it caused John Key’s popularity to slide by a few percentage points, then it might be a price worth paying. Don’t you agree?