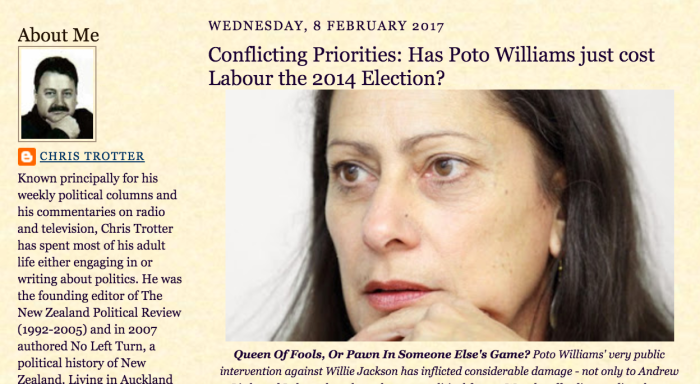 Chris Trotter has worked out who will be to blame for Labour’s 2014 election loss.

It seems unfair to blame the defeat entirely on an MP who only entered Parliament in 2013. Poto Williams didn’t do anything truly memorable as an MP prior to the 2014 election, and I suspect her name is still one that means nothing to most people.

What I mean is this: If Chris Trotter is so certain Williams was behind the 2014 loss, then it can only be because she travelled back through time to wreck everything. Or is planning to.

If this is true, and admittedly I am only speculating here (although it’s informed speculation: I’m 95% certain Poto Williams has the power to travel back and forth across both time and space), then it raises a whole bunch of questions. Like:

The least Poto Williams can do is make sure Labour doesn’t lose in 2017. In that regard, her recent outburst regarding Willie Jackson (if a carefully PR-scripted critique can ever be categorised as an outburst) seems curious. One might be tempted to put the whole thing down to the usual identity politics disagreements within Labour (i.e. a lot of older white men screaming “identity politics!” every time someone who is not an older white man dares to speak up).

But remember, Poto Williams has the ability to see into the future. I have to believe she has the good of the party on her mind when she ventures forth with these attacks, so she obviously knows something we don’t. And my guess is that she knows it’ll all work out fine, all this public fighting and unpleasantness between party members in an election year. How could it be otherwise?