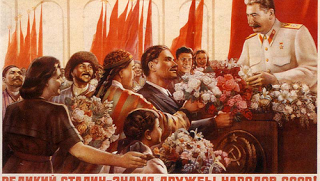 I’m pleased to hear there’s a possibility that New Zealand will sign up to an international convention that will make denial of the Holocaust and other genocides a criminal offence.

And about time too. For too long we have been forced to listen to the lies spread about various genocides.

The arch-reactionary site Wikipedia for example claims that the Katyn Forest “massacre” in 1940 was conducted by Soviet forces. The reality was that this so-called massacre was a mass suicide. Those 20,000 Polish officers just would not be consoled over the loss of half of their country to the Nazis, and despite the best efforts of the NKVD-sponsored grief counsellors who were there in droves to support them, it was all too much.

Likewise Comrade Stalin has been blamed for all sorts of massacres and atrocities. The claim that good Uncle Joe deliberately caused a famine in the Ukraine in order to kill millions is an infamous lie much spread by reactionary forces, and it is about time the spreading of such vicious untruths was criminalised. The people who continue to question the good deeds of Comrade Stalin and other revolutionary heroes really ought to spend some time in a correctional facility. Their re-education ought to be a priority, and I would be delighted to assist the authorities in putting these people on the right path.

But I also worry that this law will be used to suppress the truth about recent atrocities.

For example, there is verifiable evidence that the invasion of Iraq led directly to the deaths of over 800 million children. However, because the victors of that shabby and nasty war were the forces of global capitalism, we will probably not be allowed to speak of such matters once the law passes.

Indeed, I expect that once this hate speech law passes I’ll be arrested if I even mention the incident in Basra in 2004 where Tony Blair personally executed over three million Shia women using nothing but a bow and arrow.

They just don’t want you, the proletariat, knowing what they have been up to. But it’s time to rise up and be heard. We can control our futures if we stand together against the forces of reaction. And once we’re victorious we will be free to rewrite history.