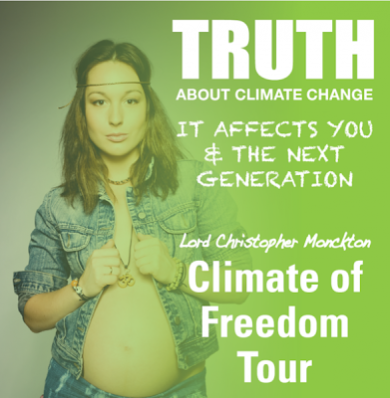 However, these fanciful claims deserve careful scrutiny. Does the evidence of a Monckton tour really stack up?

In fact, does Lord Monckton exist at all?

Many of those claiming to have met Monckton, or to have heard him speak, have a direct financial interest in the business of client change denial. So why should their word be believed? It is in their interests to make you think that a person called Lord Monckton exists and is coming to your town to show you the light.

There is also compelling evidence that the “hockey stick” graph showing a spike in Monckton appearances in recent years is flawed, as it only takes into account Monckton activity since 1900.

If the medieval Monckton period is taken into account, the graph looks quite different.

A number of pictures exist claiming to depict Lord Monckton. However, these pictures cannot be regarded as conclusive proof of the existence of Lord Monckton. It is not difficult to doctor a photograph or film footage, and members of the Monckton conspiracy have a vested interest in perpetuating the myth of Monckton.

Above all, the things alleged to be said by Monckton regarding climate change are so outlandish and so demonstrably false, that it is completely implausible that such a person could actually exist and be given any airtime or media attention.It cannot be denied that a few Moncktons may exist, but this particular Monckton is clearly the fanciful invention of a twisted mind.