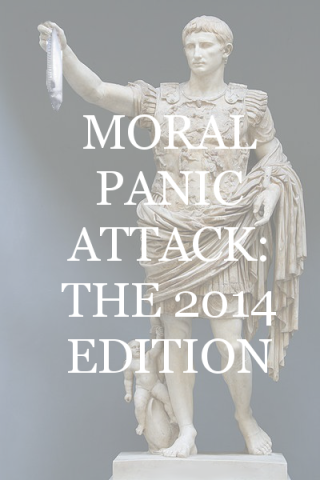 I have interrupted my holiday to rush back to Auckland, in order to participate more fully in the moral panic now sweeping the country.

If children are going to go get themselves drunk, then I need to be part of the posse looking to nail someone, anyone, everyone, up for this despicable something-or-other.

So let’s start by deciding who or what is to blame.

Could the problem start and end at the top? How convenient that John Key should be on holiday while this nine-year old, also on holiday, gets blitzed. Coincidence?

Already under pressure to explain how all their science stuff could still be true when in some parts of the world, especially the US, it’s so cold, could they have set this whole thing up as a distraction?

Here’s how I reckon it works: we expend all our outrage over youth drinking, and meanwhile those sneaky scienticians plot yet another scheme to spread their lies and discredit the truthteller lobbyists from all those oil companies.

Well I’m on to you, scientists!

Why hasn’t the Labour Party leader taken a stronger stand on this issue? Is he secretly in favour of nine-year-olds drinking themselves senseless?

A steady decline in moral standards

It’s simply inconceivable that something this awful would have happened forty years ago. This is yet further evidence that society has gone to the dogs, and it’s all the fault of our modern permissive anything-goes attitude, which is why I will be voting for Colin Craig this election. And have you noticed how all this societal trouble happened after the so-called moon-landings? Before then we had no drunkenness at all. Ask any old-timer barman.

If we’re going to keep telling people that the fruits of the economy should be distributed evenly, then it’s obvious that eventually nine-year-olds will look to redistribute for themselves the contents of their parents’ and friends’ liquor cabinets.

If we really want to curb youth drinking then we’ll need to deregulate, aggressively cut taxes, and make sure liquor is readily available without restriction from every corner store. The evidence tells us that once low taxes have made alcohol more affordable, and there is sufficient competition in the market targeting underage drinkers, the drinking problem will go away.

Who’s going to argue with such powerful evidence, coming as it does from experts within the liquor industry? Why would they make this stuff up?

This is all a result of AGGRESSIVE CORPORATE HEGEMONIC BEHAVIOUR by liquor companies, aided and abetted by irresponsible and reckless RIGHT-WING politicians and our BUSINESS ELITES determined to SELL OUR COUNTRY to the highest bidder!! WAKE UP, SHEEPLE!!!!*

* apologies: my caps lock button seems to be MALFUNCTIONING!!!

The boy must have come from a broken home, which must have something to do with welfare, even though I haven’t done my research on the boy or his family background, but then excessively generous welfare is responsible for everything bad, and that is a fact.

It’s bound to be. All good hard-working parents know that their kids never ever do anything bad or stupid.

No, forget everything else, and ignore all the other crap I came up with. I have it. Society is to blame! You! Me! Us! Yes, that’s it!

So there’s no need to do anything, because the problem is just too big to tackle. Whew!

One thought on “Youth drinking: who is to blame?”