Cabinet yesterday approved plans for pirate flags to fly on many government buildings on September 19 next year.

The Prime Minister told the press at his weekly post-Cabinet media conference that National had been in talks with the pirates for several months.

“We recognised the importance to Piratedom of the black flag, but we wanted to give the pirates time to consult on what was the most appropriate symbol for them.”

Key admitted that negotiations with the pirates over the issue had been difficult.

“We had a few setbacks along the way, but we got there in the end,” he explained. “These things aren’t always easy, but hey that’s politics.”

Key refused to confirm that the first negotiating team sent by him had been abducted, robbed, and thrown to the sharks.

Aotearoa Pirate Party leader Captain Barbarossa said that former National Party MP and sea captain Richard Worth had been instrumental in bringing the deal together.

“Arrr, he be an old salty sea dog, that one! Cap’n Worth an’ his crew of scurvy dogs made a deal we couldn’t refuse. Treasure, rum and women! We was all three sheets to the wind in no time.”

Barbarossa confirmed that flag negotiations had been tense at times.

“Avast! We fired a shot across the bows, then boarded her fast. Before they knew what hit ‘em the lads were emptying their purses and feeding ‘em to the fishes. They be with Davy Jones and his locker now. Now weigh ye the anchor and hoist the mizzen, before I have ye swingin’ from a hempen halter!”

However, other pirate groups have spoken against plans to fly the traditional Jolly Roger flag. Pirates of Penzance Party leader Captain Sam Hawkins, yesterday called Captain Barbarossa a “bilge rat” and demanded that the Government fly a red flag instead. When asked to explain why Captain Hawkins would only say “Arr! Arr! Arr! Arr!”.

Shortly afterwards an official from the Pirates of Penzance Party, known only as Polly, clarified the party’s position.

“The word ‘Roger” comes from the French word ‘rouge’, which means ‘red’. The original Jolly Roger flag was red. Now who’s a pretty boy then? Polly want a cracker! Pieces of eight! Waarrp!” 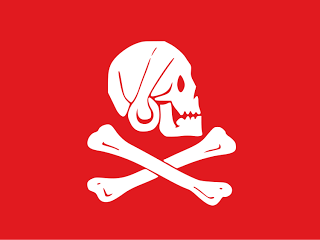 The Red Flag of the Pirates of Penzance Party

The decision by Key has dismayed some former Royal Navy admirals and sea captains. Retired RN captain Jack Aubrey said he was incensed by the move.

“Damn their eyes! That blackguard lubber Key and his blasted cabinet! A pack of infernal scrubs, all of ‘em! Belay! Belay I say! Flog the villains round the fleet!”