I’ve noticed a singular lack of posts about big fish*. Please remedy this before I am forced to take action against you.

*True, you have posted several times about whales, but that’s not good enough. We all know whales are mammals, not fish. You’re not fooling anyone.

Well, Rich, it’s funny you should make comment about who is being fooled, because you seem to have swallowed one of the most brazen lies in the history of science.

The fact of the matter is there’s no evidence whales are anything other than fish.

This is obvious. Ask any two year old. Show them a picture of a whale and I’ll bet they say “fish”.

So why, if the truth is obvious even to small children, don’t you get it? To be fair, most of the scientific community don’t get it either. Or they do but just won’t tell us the truth. You see, there’s money in whale research. If whales were simply classified is dumb fish, we’d hunt them to extinction in a hurry and then where would the scientists be? This is all about scientists and their precious research funding.

As for the so-called infallible evidence the scientists have put forward, I’ve heard it all before, and it can all be rejected. For example, the claim that whales are mammals, because they’re warm-blooded. If you critically examine the evidence in support of this claim you’ll find that the data that supposedly establishes a link between warming and whales is flawed and relies on assumptions that cannot be proven.

Take a look at this graph, for example. It proves that, if anything, whale blood has been getting colder. 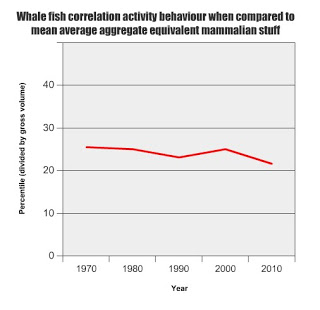 So why, Rich, won’t you open your eyes?