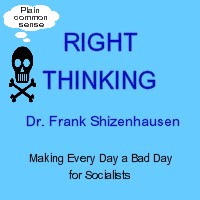 Hard-hitting conservative columnist Dr Frank Shizenhausen cuts through the crap and gets to the truth.

The 2011 census has been cancelled.

The earthquake that destroyed so many lives and wrecked so many buildings finally gave me something to smile about.

That hotbed of unreconstructed socialism, the Department of Statistics, can’t run the census because its building is damaged and there’s chaos in Christchurch.

It’s an indisputable fact that census data is routinely misused by bureaucrats and big government advocates. Instead of population data being used to determine who may live and who must die, it is used in ways that Comrade Stalin would be proud of. Water fluoridation, welfare benefit expansion, and the Marxist indoctrination of our pre-schoolers, are but some of the things these officials have planned for us. The data gives them the tools they need to continue their reign of terror.

That’s why whenever there’s a census I go bush. As far as Big Brother is concerned I don’t exist.

Being outside the system in every way has its advantages. I don’t pay tax (or, as I call it, the stupidity levy), and when I do have the occasional brush with officialdom they have trouble pinning me down. If the shock troops ever do finally catch up with me in my bush hideaway I will have some surprises for them that will make Ruby Ridge seem like a children’s picnic.

Since we’re stopping the census, why don’t we also consider a population freeze? I’m not suggesting we stop people from breeding (the PC mob would never allow their numbers to diminish). Let’s just stop counting them. Pretty soon the state would just become irrelevant. When we’re a nation of twenty million (probably some time next year, with all these foreigners coming in and with all the breeding beneficiaries), having a government that thinks there are only four million people to look after will mean the other sixteen million of us pay no tax.

The end of the census may be something worth celebrating, but there’s nothing else joyous about events in Christchurch. So many have lost their lives or their homes. I watch the news on the TV and see communities coming together, pooling resources, helping neighbours out and sharing everything they have. People helping strangers. Do you know what it makes me realise? The Communists have won.

The market just isn’t working properly in Christchurch. In a time of shortage and want people should be hoarding, and then holding out for extortionate prices. Water is a precious commodity, but instead of making a killing on selling it to the desperate and needy, they’re giving the stuff away. It just doesn’t make any economic sense.

Let me tell you that if there’s ever a disaster up my neck of the woods you’d better have a wallet full of cash if you expect help from me. My bush fortress has a well, and a bunker with enough tinned food to last for five years. I may be willing to share my little stash with you, but for a price. So cough up, or stay away. And don’t push me, because if you think the world would mourn another dead socialist you are surely mistaken.