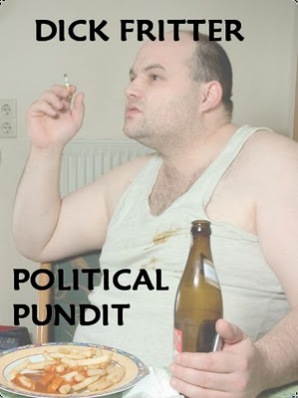 Former political strategist and now full-time pundit Dick Fritter returns to this blog after a long break. A self-proclaimed politics tragic, he has worked with just about everyone, from Rob Muldoon to Osama bin Laden.

Fritter’s biographer, Michael Bassett, has described the master strategist as a “hard drinking, hard living, hard loving man who can sniff out any scandal and manage any crisis.”

Fritter will be best known to readers as the brains behind the controversial “Homo/Not Homo” billboards that worked so effectively for National in the 2008 election.

It’s been a long few months, and I’ve been the star of just about every newspaper, talk radio channel and current affairs show.

The end of another political year is an ideal time to reflect on my achievements, before kicking back for the summer to chase some tail and sink some serious piss with my old mates Barry and Bill.

When it comes to politics I’ve seen it all. So there was nothing, absolutely nothing, that surprised me about November’s election. I predicted National’s win and the good old-fashioned rogering that Labour got. I correctly picked that the Labour Party would end up with its trousers around its ankles, and that John Key would go hard all the way to the end of the campaign.

Allow me to remind you how good I really am. Let’s go through some of my predictions.

Just after Don Brash took over the party I wrote on my Herald blog:

This is a stunning coup that will have the mainstream parties in a panic. ACT will be at over 10% in the party vote by the end of November. Lock it in!

Now some people have since criticised me for this prediction, pointing out that ACT was almost obliterated in the November election and barely managed 1%.

What a lot of pointless girlie nitpicking. Am I really to blame if a Herald sub-editor can’t manage to put a decimal point in the right place? I meant 1.0%, not 10%! I’ve since asked the Herald to change the post to correct their egregious error.

And I was almost bang on with my prediction, wasn’t I?

I predicted Winston’s return, even though nobody believed me at the time.

Someone mocked me the other day, claiming that on Newstalk ZB I told Larry Williams it would be a cold day in Hell before Winston Peters led his party back into Parliament.

Were their ears painted on?

What I actually said was that it would be a cool day in Wellington on the day Winston led his party back into Parliament. And I was right. On the day they all swore the oath it definitely got cooler as the evening drew nearer. It can get chilly in the capital of an evening.

You don’t believe me? Well go and listen to the recording of my interview. What do you mean the file’s not available? Well that’s very convenient for you, isn’t it?

When it turned out that the sneaky bastards had taped Key and Banks having tea I wrote on my blog:

Two grown men having a ladies’ drink in a fancy cafe? Have they been completely emasculated by the Sisterhood? Has this pair lost their pair? Mark my words, this will turn out to be the most momentous day of the campaign. National can now kiss goodbye to any chance of winning on November 26.

I was obviously referring to the Epsom electoral candidate contest. And was I right or was I right? That Goldsmith girlie-man came second to my old mate Banksie.

From the comments left on my blogpost it looks as if some people think I was predicting National’s defeat in the general election. The clowns!

Anyway, I went back to my blogpost and added “in Epsom” after “November 26”, but only because I can’t be arsed dealing with so many comments by the criminally uninformed and illiterate. The fools just don’t understand how a statement can have several shades of meaning.

Just after the three Labour leadership candidates were announced I wrote on my Stuff blog:

Here’s my pick. Cunliffe first, Parker second, Shearer third. You can bank on that prediction. That’s a promise.

A couple of bloggers have been mocking me for making what they say is a spectacularly bad call. Wrong! I got it right, yet again. Cunliffe really was first.

Does not Cunliffe’s surname go ahead of Parker’s when ranked alphabetically? Does not Parker come second and Shearer third?

See what I mean? Right every time. Suck on that!

Electing David Shearer as leader would be the dumbest move in history. Even dumber than giving women the vote, taxing tobacco or banning slavery. No sane group of politicians would ever contemplate putting such a vomit-inducing do-gooder in charge of their party. Just like fairtrade coffee, Shearer is bound to leave a foul taste in the mouth of the public.

I have been saying for years that Labour caucus member are all as mad as badgers. So I was absolutely right–again!

You can always rely on Labour to do the wrong thing. What the party really needed was a leader with a bit of spunk, someone with balls, someone with a bit of lead in the pencil. One of them really just needed to pull his pants down, get in amongst it, go hard and show us his stuff. Instead they elected someone who wants to change the world and make it nice for others. Excuse me while I puke.

He won’t get anywhere, because the party remains obsessed with identity politics. I don’t make a big song and dance about my status as a privileged white male, so why do all those women, gays and minorities have to kick up such a fuss all of the time? And then there are all the unionists in the party running the place while moaning about low wages, God help us! They should just STFU and get on with cooking my burger.

Anyway, I’m sure you will now agree that all of the above prove that when it comes to political predictions I am Number One. When it comes to politics there’s not a thing I haven’t seen, done, written a book on, rooted, drank under the table, or sold to the gullible voters. Everyone else, like your Farrars and your Hootons, is a wannabe. To be a successful player you need big balls and a big gut.

But in spite of my record I get grief from others. The thing about all this punditry is that, even though I have a better record than anyone else on the circuit, people still think they have a right to have a go at me. It can be demoralising for some people in the game, but I have a thick skin and have learned not to take my detractors seriously.

Some of them are just plain crazy, like the woman who last week told me I was a fat sweaty misogynistic jerk. What a crazy thing to say! I love women, I really do, especially when I don’t have to pay for it. And if I’m such a woman-hater, how can I have been married four times? Go on, ask my ex-wives what I’m like. Actually, don’t talk to the first three, because they’re vicious lying bitches. And don’t bother talking to Tatiana, unless you speak Russian. The cow.