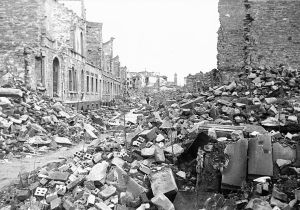 Auckland mayor Len Brown is hoping that images of destruction like this one will inspire Aucklanders to support the invasion plan.

Auckland mayor Len Brown has unveiled a bold plan to destroy Hamilton and enslave its residents.

Brown returned to public duties yesterday, after spending most of the last week away from the media, and he announced the invasion plan at a rally of supporters outside the Auckland Town Hall.

“It’s time!” Brown told the enthusiastic crowd of several hundred people. “No longer will we stand idly by and ignore their provocations and insults.

“Under my plan we will make Hamilton such an unbearable city of fiery horrors that its residents will wish they were living in 1945 Berlin. Their city will be a place of such misery and death that they will welcome the slave chains we place on them.

“Hamilton, your time in the sun is over. Prepare for your demise.”

Brown did not go into details of the plan or its timing during his address to the crowd. But he later spoke to the media about the proposed invasion.

The Auckland mayor also dismissed claims by his opponents that the whole thing was a cynical plan to distract people from his very public marital woes.

“That is completely false,” said Brown. “We have long had our eye on Hamilton as a dangerous rival, and as a potentially valuable source of slave labour to help build some of Auckland’s vital infrastructure.

“We could shave millions off the cost of the central rail loop if we used manual labour instead of expensive machines to dig out the rail tunnels.

The invasion plan has raised the ire of Brown’s opponents, including his rival John Palino.

Palino questioned whether a military attack on Hamilton would be in the best interests of Auckland residents. He also questioned Brown’s motivations.

“I’m concerned that Brown might be using this to distract us from the scandal that has erupted around his personal life,” said Palino.

“But putting that aside, Len Brown could have come up with something bolder and more ambitious. I have nothing but hatred and disgust for the people of Hamilton, but will the destruction of that city really improve Aucklanders’ quality of life?

“Why are we not instead focusing all of our military resources on those bureaucrats in Wellington?”

“I’m not against an assault on Hamilton, and God knows I’d love to see the citizens of that place in chains, their houses burned to the ground, and their lives ruined forever.

“But any move to wipe Hamilton off the map needs to take onto account our constrained fiscal circumstances.

“If the mayor could commit to obliterating Hamilton City without any increase in rates, then of course I would be happy to support the plan.

“But where is the money for this invasion going to come from? We will need to recruit and train troops, and they will need weapons and armoured vehicles. We are starting with almost nothing, so I can’t see how this can be done within the Council’s current budget.

“There’s an even bigger problem, because our mayor doesn’t have the legal authority to raise a standing army, or to declare war on another council.”

Len Brown insisted that he was committed to the plan, and he sought to ease fears that an invasion of Hamilton would be unlawful and prohibitively expensive.

He admitted that the current legislation was “unhelpful”, but said he was in talks with central government about broadening the powers of local authorities to permit full-scale military operations.

He also dismissed fears of a rates blowout, and pledged to work constructively with council members to address their concerns.

“There is a cost to the operation, for sure. But the plan pays for itself, because once victory is achieved and Hamilton is ours we will have a secure base of operations for a broader assault on the wider Waikato region. Remember, this is some of the most valuable farmland anywhere in the world.

“I’m expecting the plan will return a profit to the people of Auckland, while obliterating once and for all the hated Hamilton menace.”

Hamilton mayor Julie Hardaker said Brown’s plans were unhelpful and a distraction for her council.

“We are in discussions with our lawyers at the moment,” said Hardaker. “It does seem, however, that any move by Auckland to invade our city would require significant amendments to the Local Government Act, as well as the Crimes Act.

“At this stage we would not support any such amendments. We’re focused on the issues that matter to Hamilton ratepayers, including transport, rates, and making our communities better and safer places to live. We’re not interested in a full-scale war with Auckland. A war we would incidentally win easily. ”

Hardaker said her council would push for a settlement of all differences between the two cities. But she warned that Hamilton would not submit meekly to any invasion.

“We have a dirty bomb hidden somewhere in central Auckland,” she said.

“The moment Brown launches his plan I’ll give the order, and half the Auckland CBD will go up in flames.

“Don’t think we won’t do it. Remember, we took fluoride out of our drinking water. If we were prepared to ruin the teeth of our own residents, just imagine what atrocities we might be prepared to commit against our enemies.”